Last weekend was my third Rails Rumble. Michelle, Kelly and I set out to build a social news aggregator aggregator. We called it Agragr. 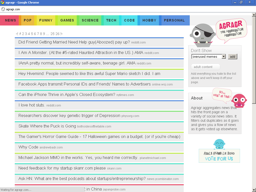 Agragr is only really one page. We worked to pack in as much information as possible to give people a fast overview of news as it comes in. The simplicity and density of the information on the page along with the convenience of it polling for new news and notifying you in an non-obnoxious manner is nice. I can leave it open when I go out and when I come back I know exactly what new stuff popped up without trawling through links I've already read on a multitude of different sites.

This Rumble was much more pleasant and relaxed than the previous years. We had a smaller idea and didn't end up cutting features on Sunday like we have in the past, we even had time to do some testing and caught a few of the weird little bugs that snuck in. Delivering something that's complete and useful is a much better feeling than pushing out something with niggling bugs.

Having a team of three was also surprisingly convenient. With a designer, a javascript dev and a Rails dev we didn't end up stepping on anyones toes and always knew who to ask about something. Filling out the team might have let us broaden our target, but we've learned that that can be pretty dangerous when you only have 48 hours.

I've normally learned a lot from doing the Rumble. That was slightly less true this year, although there was a good deal of shiny new Rails 3 things that it was a good chance to use. The new scoping and Arel methods made writing all the filters much much easier and cleaner than filtering has been in the past.

This Rumble was fun and relaxed. For any future Rumbles I'll probably continue with the idea of building small functional utilities that I'll use instead of epic beginnings of larger projects. Less stress and you can sleep, so you don't lose the next few days of the week to recovery.


The following is a brief log of what I did during my waking periods of the competition:

Phase 2(Central 19 hours)
Fixed RVM and passenger issues.
Wrote all the front end stuff for spitting out links.
Worked out all the session details for storing filters and topics.
Sorted out cron tasks for server.
Worked on scoping all the filters with shiny new Rails 3 database methods and scoping.
Generecised importers so that we can easily add future RSS feeds and Reddits.
Fiddled with timestamps a whole bunch to get the right things popping out on the page when it's polled.

Phase 3(Final 4 hours)
Wrote a bunch more filters.
Sorted out some bugs with updating topics and filters.
Testing and helping with bits and pieces.
Tagged final release.
at 1:59 AM

If you plan to play for real money, you'll need a approach to make a deposit, corresponding to a bank card. Always check whether or not your local forex is on the market, and make sure you|ensure you|be positive to}'re eligible to make real-money transactions. Some banking choices for web gambling are free to use, and 빅카지노 the most effective casinos provide quick deposits and withdrawals. However, there can also be some type of ID verification process before a withdrawal is authorised.