Last Saturday Nahum Wild and I ran a Rails Bootcamp (kindly sponsored by 3months and youdo) here in Wellington aiming to introduce developers to Rails in a workshop like format. For both of us it was our first shot at a workshop like format instead of straight presentations and we learned a lot in the process. 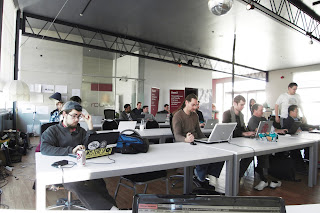 We decided to run the workshop on Rails 3 beta instead of 2.6 since we thought it would be more use to new developers to learn what would be current in a couple of months than something that would be changing almost as soon as they learned it. It's hard to say whether this was a good idea or not though, the rails beta was unfortunately still a little bit too liquid to be able to handle easily and the support across operating systems led to us having multiple different versions of ruby deployed amongst the developers. Luckily, it's unlikely to be a problem again for quite some time.

We aimed to start generally helping people install rails(getting up to the stage of a running server and database) from about 9:30 and start the workshop proper at 10:30. This went reasonably well getting everything installed, mostly via RVM for mac and Linux and a set of detailed instructions for the windows people. Strangely windows turned out to be the most problem free for installing on. On the other hand Linux was nightmarish when dealing with some of the requirements for rails 3 and ruby 1.9.2, a complete reversal of the ease of installing the stable versions.

We started with a brief talk and some disclaimers about beta software etc. I then got into the actual coding with a whirlwind tour of ruby, introducing the bare minimum necessary to be able to do what we would need that day in rails and getting them to play around in IRB a little. Some people would have preferred more depth, ruby is a complete language on its own though and teaching it properly concepts and all would have easily eaten a workshop all by itself. Really though, Ruby is very accessible and I hope that people will be able to pick it up from docs and bits and pieces(although I do recommend going back and looking at its more advanced features later on).

Once we'd gone through some basic play in IRB I moved on to getting started with Rails. My goal was to get a basic CRUD version of a registration for a site going in Rails. I coded on a projector using gedit with a file tree down the side so people could see what I was working on and where. This seemed to work reasonably well and I only opened files in vim by accident(habit) twice.

I avoided using scaffolds as I think they're a little too magical to be much use for learning and one of the major things I'd heard from people who had learned Rails was how really getting the hang of MVC and to a lesser degree REST had been the hardest part of understanding Rails apps. So I wanted people to be working with a more nuts and bolts level of Rails. I worked through generating the models, writing and running migrations, generating and controllers and writing actions, setting up the routes to writing the views.

Progress was slower than expected and I did at one stage accidentally create rather a lot of chaos by leaving off a rather important s from generating the controller. It took a good 10-15 minutes to sort out all the oddities that caused and I got further confused by a change in how resources deal with pluralization that I hadn't known about(working on the edge is exciting). Once we'd sorted it all out everything seemed to run smoothly again and we'd managed to see just how magical rails can be at times with its guessing what you might be meaning when some incorrect pluralizations worked and others didn't.

Around this point in the day(2pm'ish) we realised that we had far too much material to fit into the day given our current pace. It's very easy to forget how much is actually going on when you're familiar with a language. We slightly modified the depth of the presentation and slightly later I redirected my attention to just getting things prepared for Nahum to be able to pick up with his portion of the demonstration, unfortunately this lead to a bit of extra chaos.

I decided to whip out the last few aspects of the site that would make it functional, edit and delete and some links. This went well until we hit delete which I hadn't really thought about, but doing it with a HTTP delete actually requires javascript, which the lack of a default application layout in the new rails generator means it never ended up being included. After a couple of minutes of confusion regarding this I went with just showing off a named route to the delete method in the controller, which meant we at least covered a relatively important part of the router functionality that I hadn't got around to earlier. Although, the routes.rb file is particularly well documented in Rails.

I handed over to Nahum and he went on for another couple of hours with some data manipulation and a very brief overview of some of the stuff we hadn't had time to cover in depth. By the time he finished we'd been coding or talking about code for a solid nine hours.

Overall, the response to the workshop was very positive and I learned a hell of a lot and will be looking at a number of changes that would make it work better. In particular we need to look at splitting it out into more of a series of smaller workshops so that things have time to digest and people can have a chance to work at their own speed.

Possibly setting up an application and fiddling with particular bits one at a time to see their effect would also allow us to work more smoothly. It is, unfortunately, very difficult to give people much in the way of things to do on their own until you've got the full set of code in place to go from the model to the controller to the view. People only started being able to work on their own near the end of the rails segment. It was pretty great to get to the point where we started seeing the apps differentiate and have odd new things added.

I'm looking forward to doing a non-beta version of the workshop with some non-beta software in the near future and getting a chance to see how I can apply the improvements I've thought of since the bootcamp.
at 4:28 AM 1 comment: